This massive 200 metric ton Hunger cylinder is a key component of a dredging barge essential to the nation of Japan. This dredge will keep the harbors and shipping channels open for commerce and trade. 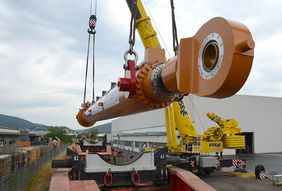 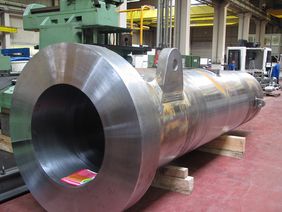 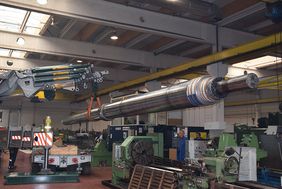 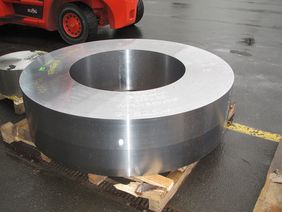 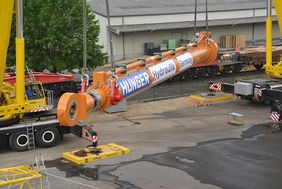 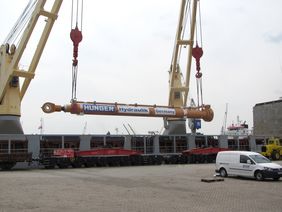 Hunger Hydraulics in Lohr am Main, Germany designed and manufactured this giant cylinder. In July 2015, it was shipped to Japan and to be installed on a barge-mounted excavator where it operates a massive dredge shovel large enough to hold two touring buses!

Although this is the heaviest cylinder Hunger has ever built, Hunger has previously built several others that are either larger in diameter or longer, but not quite as heavy as this 200 metric ton leviathan.

Hunger’s engineering expertise was up to the challenge with this massive modern day marvel. For starters, the Hunger engineers had to create the solution for the best way to design, machine and assemble the cylinder tube. No steel mill in the world was capable of making a tube long enough with the wall thickness that this cylinder required. But as they do on a regular basis, Hunger rose to the challenge by providing a solution. Hunger drew upon its 75 years of engineering and metalworking expertise to do what they do best. The engineered solution was to build the tube from four separate pieces that they machined, welded and honed all at the Hunger factory in Lohr am Main. The next challenge was the cylinder rod; Hunger machined the rod from a one-piece forging and then applied their ceramic rod coating that has been proven for years in a multitude of extremely corrosive ocean environments.

Everything was done in house; Hunger even machined the rod eye that attaches the cylinder rod to the dredger. The seals and bearing elements (wear bands) are also produced by Hunger DFE, with their unique design and 200+ worldwide patents, this sets them above and beyond the competition.

Hunger not only met, but exceeded the three critical factors that were the most important to their customer: a highly experienced engineering team, the ability to do all of the manufacturing in house and the expertise in protective rod coatings to ensure long cylinder life and excellent performance.

Before the cylinder was shipped on July 15th, 2015, it was inspected and tested for performance, safe operation and manufacturing quality. The customer was in attendance observing the cylinder as it passed all of the tests with flying colors, earning it the Bureau Veritas certification.

This massive cylinder was an extreme challenge to ship. Heavy-duty mobile cranes and transporters were used to load the cylinder on the special railroad equipment. The railroad used a set of two 10- axle railroad cars to transport the cylinder to the port of Rotterdam, Holland, where it was loaded onto a cargo ship.

The cylinder’s “heavy-weight title” was short-lived as Hunger won an order for two cylinders that have a 13ft diameter flange and are approximately 30% heavier, weighing in at 260 metric tons each, that’s 572,000 lbs!

HOW BIG DO YOU WANT IT?