Recently one of the Crawlers at the Kennedy Space Center was upgraded for the next mission- the Space Launch System (SLS), a rocket and launch tower combination heavier than even the Saturn V moon rockets the crawlers were designed for. 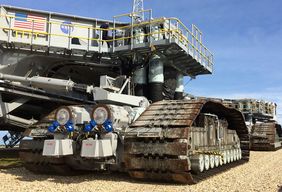 The Crawlers have been a long-time veteran of moving America’s rocket ships from the Vehicle Assembly Building (VAB) to the Launch Pad, a distance of up to 4.2 miles at a record breaking speed of 1-mph since the late 1960’s. Their payload has always been the symbols of American engineering, courage and accomplishment.

Hunger Hydraulics was awarded the contract at the end of 2012 to bring their cutting-edge engineering, knowledge and skills to a very challenging situation: Leveling the world’s heaviest load. Responsible for keeping the loads level are the Jacking, Equalizing and Leveling (JEL) cylinders which Hunger designed, constructed and tested 100% in House at their headquarters in Lohr am Main Germany. A total of 22 cylinders were delivered in July of 2014.

The redesign of the cylinders was necessary to increase the load capacity of the crawler by 50% to over 18 million pounds. A load that would be a challenge if parallel to the ground made incredibly more challenging by standing it on end, rising over 380 feet into the air, that is longer than a football field!

The world-renown reputation of Hunger earned from 70 years of manufacturing the best hydraulic cylinders for the most demanding applications, and 200+ patents for seals and bearings gave NASA the confidence that Hunger cylinders would perform at the highest level of excellence and dependability that is essential for every company involved in the space program.

When you have a project that requires the best, the toughest, the most precise cylinders, Hunger is the place to get it done right! Like NASA’s legendary accomplishments are to space exploration; Hunger Hydraulics is to cylinders. No job is too big or tough for the company that builds the biggest cylinders in the world!